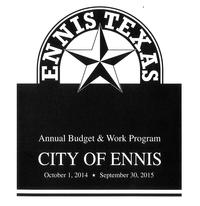 The Finance Director and the Finance Staff institutes and operates a governmental budgeting system that provides financial information to both external users and internal management. This information is used to monitor the expenditure of public funds and to ensure that the financial transactions of the City are conducted in accordance with statutory and contractual requirements and City policy.

Budget oversees the preparation of the annual budget and monitors compliance during the year. The following budget documents are the original budgets adopted by Council. They have not been updated since that adoption and do not include any subsequent budget amendments adopted by Council.